OPPO just announced the new Reno 7 series of smartphones – and today, we have the Reno 7 with us. Targetting at the center of mid-range phones, the Reno 7 has a few specialties here and there to make itself stand out from the others.

The OPPO Reno 7, to me, is a rather simple phone. We’ll start off with the design of the phone because it is the one thing that OPPO put a lot of focus on. And I can see the fruits of their labor as this is one of the most stunning, uniquely designed phones I’ve seen. 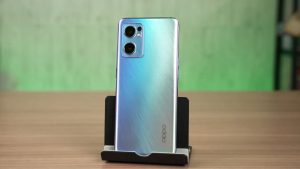 OPPO calls this the “Startrails Blue”. Hopefully, I’m not misquoting OPPO as I do remember them saying that it looks like a meteor shower happening. The entire backplate is also multicolored too – looking at the phone through different angles will result in different colors.

Whatever is happening can’t be felt with my fingers as it is covered by a very fine matte finish. Also, if you noticed, the camera bump is actually translucent and covered with the same matte finish. This creates a very unique look that will surely catch some attention. 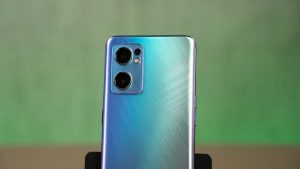 The cameras themselves though, is a different story. It comes with a total of 3 different cameras but once again – I’ll consider only two of them to be usable to take pics as the 2MP macro camera is pointless. 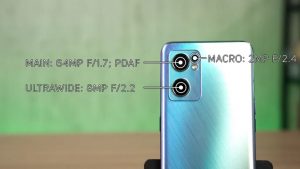 As for the screen, this phone comes with a 6.43-inch AMOLED screen with up to 90Hz refresh rate and has a resolution of 2400×1080. Nothing out of the ordinary in terms of specs, and the screen just looks fine through eyes. 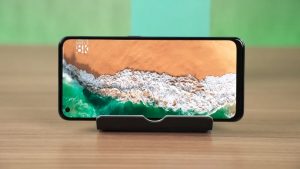 For the performance, this phone comes with a MediaTek Dimensity 900. In terms of day-to-day usage, there is no problems at all. We also did a real quick game test and found out that its gaming performance is somewhere along the lines of the new Snapdragon 695. In Genshin Impact, we can go somewhere around low or lowest graphical settings and that’s about it. 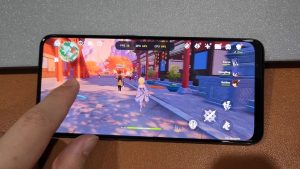 As for the battery life, we can get around 14 hours in our battery life test with its 4,500mAh battery – which I think is just magnificent and goes to show how efficient the new Dimensity 900 chipset really is. To put it in perspective, I’d expect this phone to last a full day of usage with no problems.

As for the charging time though, this phone comes with a proprietary 65W SuperVOOC charger. We can get all the way from 15% to 100% battery in about 30 minutes – which I think is seriously fast if you are in a pinch.

One of the reasons why the 65W is so much faster than its competitor’s 65W charger is because the OPPO Reno 7 is using a dual-cell battery. This is something that was not highlighted by OPPO specifically but was shown on their website.

And for the software – the OPPO Reno 7 comes with ColorOS 12 on top of Android 11.

Overall, I think ColorOS 12 is actually quite a good Android skin to use. However, for first-time users, there are a lot of random popups asking for permission before telling us what the feature is. Also, there is way too much bloatware in this phone.

That leads us to the final segment – the price. This phone costs PKR 75,000. I think that this phone has a lot of plus points – like its design, beautiful screen, supremely fast charging, and also good battery life.

I just think that it is way too expensive for what it offers. I mean, yes, this is considered a premium mid-range phone, but a mid-range phone nonetheless.

Perhaps getting this phone during a discount or alongside some other promotions or gift bundles might be a better deal.